Govroam and eduroam are services aimed at facilitating network roaming access to staff and students visiting participating organisations. Our current national response to the pandemic is to radically restrict travel and work for non-keyworkers, so we’d predict that Jisc’s roaming services would be barely used at present. The situation seems to be a little more nuanced than that. 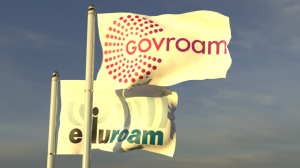 The impact on govroam does follow the predicted pattern, with day-for-day comparisons with this time last year showing an 80% reduction in roaming authentications even without allowing for the growth of the service over that period. However, our view of govroam usage is limited to the actions of users who roam outside their local region, such that their authentication traffic is routed by Jisc’s central servers. Under normal circumstances, we estimate that about 80% of govroam roaming happens within regional federations, with staff traveling locally to neighbouring organisations. So we can’t yet draw any firm conclusions on how govroam usage has changed at the local level.

The picture for eduroam is a lot clearer, as all UK roaming authentication traffic passes through the Jisc core. Based on growth rates from the last couple of years, we would have expected eduroam traffic to have increased this March compared with last year by around 10%, but what we are actually seeing is a drop compared to last year of some 36%. Whilst this is a significant reduction, it’s by no means evidence of eduroam lying idle during the present crisis. We have still seen some 100 million authentication attempts across 1.2 million unique devices in March this year.

So what is all this roaming activity in the education sector? Online resources seem to suggest that the majority of academic organisations are delivering teaching content online and campuses are closed to students, with non-pandemic research activities greatly curtailed. It’s unlikely we’ll get a clear picture until after the dust settled from the Corona incident. However, it’s worth noting that alongside the extensive govroam presence in the NHS, there is also an eduroam presence in most teaching hospitals. We wouldn’t be surprised if it turns out that the combination of medical research and relocated NHS staff accounts for the majority of this ongoing roaming activity.

Update: I’ve delved further into NHS use of federated roaming in this blog.

In the meantime, your federated roaming team continues to keep the machinery turning: if you have a roaming requirement or query, please get in touch – particularly if it is regarding a service that may assist the keyworkers that are keeping society running in its current reduced scope.